Melbourne Airport’s 4 Terminals have 56 gates: 40 domestic and 16 international. There are five dedicated freighter parking positions on the Southern Freighter Apron. 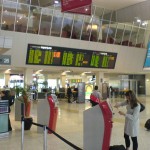 Terminal 1 hosts domestic services for Qantas,  Jetstar and QantasLink. Departures are located on the first floor, while arrivals are located on the ground floor. There are a wide range of shops and food outlets at the end of the terminal near the entrance into Terminal 2. Qantas has a Qantas Club, Business Class and a Chairman’s lounge in the terminal.

Terminal 3 is home to Virgin Australia and Regional Express Airlines. It currently has eleven parking bays served by single aerobridges and eight parking bays not equipped with aerobridges.

Terminal 4 – originally called the Domestic Express or South Terminal – is dedicated to budget airlines and is the first facility of its kind at a conventional airport in Australia. It was originally constructed for Virgin Blue (Virgin Australia) and Impulse Airlines. Virgin Blue eventually moved into Terminal 3 following the demise of Ansett.

Looking convenient and affordable accommodation near Melbourne Airport… then Hume Villa Motor Inn has some good deals for you.

Office Hours 7am to 10pm
For Arrivals after 10pm, Please Call our Office for Arrangements
Melbourne Accommodation
Recent Posts